This is a story with some bite to it:

The King of Sharks
retold by
S. E. Schlosser

One day, the King of Sharks saw a beautiful girl swimming near the shore. He immediately fell in love with the girl. Transforming himself into a handsome man, he dressed himself in the feathered cape of a chief and followed her to her village.

The villagers were thrilled by the visit of a foreign chief. They made a great luau, with feasting and games. The King of Sharks won every game, and the girl was delighted when he asked to marry with her.

The King of Sharks lived happily with his bride in a house near a waterfall. The King of Sharks, in his human form, would swim daily in the pool of water beneath the falls. Sometimes he would stay underneath the water so long that his bride would grow frightened. But the King of Sharks reassured her, telling her that he was making a place at the bottom of the pool for their son.

Before the birth of the child, the King of Sharks returned to his people. He made his wife swear that she would always keep his feathered cape about the shoulders of their son. When the child was born, his mother saw a mark upon his back which looked like the mouth of a shark. It was then she realized who her husband had been.

The child’s name was Nanave. As he grew towards manhood, Nanave would swim daily in the pool beside the house. Sometimes, his mother would gaze into the pool and see a shark swimming beneath the water.

Each morning, Nanave would stand beside the pool, the feathered cloak about his shoulders, and would ask the passing fishermen where they were going to fish that day. The fisherman always told the friendly youth where they intended to go. Then Nanave would dive into the pool and disappear for hours.

The fishermen soon noticed that they were catching fewer and fewer fish. The people of their village were growing hungry. The chief of the village called the people to the temple. “There is a bad god among us,” the chief told the people. “He prevents our fishermen from catching fish. I will use my magic to find him.” The chief laid out a bed of leaves. He instructed all the men and boys to walk among the leaves. A human’s feet would bruise the tender leaves, but the feet of a god would leave no mark.

Nanave’s mother was frightened. She knew her son was the child of a god, and he would be killed if the people discovered his identity. When it came turn for the youth to walk across the leaves, he ran fast, and slipped. A man caught at the feathered cape Nanave always wore to prevent him from being hurt. But the cape fell from the youth’s shoulders, and all the people could see the shark’s mouth upon his back.

The people chased Nanave out of the village, but he slipped away from them and dived into the pool. The people threw big rocks into the pool, filling it up. They thought they had killed Nanave. But his mother remembered that the King of Sharks had made a place for her son at the bottom of the pool, a passage that led to the ocean. Nanave had taken the form of a shark and had swum out to join his father, the King of Sharks, in the sea.

But since then, the fishermen have never told anyone where they go to fish, for fear the sharks will hear and chase the fish away.

Read the original post on the American Folklore site. 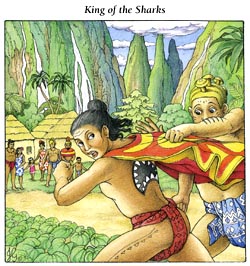