In Hinduism, Hanuman is a hero who helped Rama (an avatar of Vishnu) rescue his wife, Sita, from King Ravana of the Rakshasas. He may have been an avatar of Shiva. In China, he has also been the object of worship, as Sun Wukong, the Monkey King.

I admit, I’m treading into some interesting territory here. My own background knowledge on Eastern religions and philosophies is thin at best. However, I want to know more, understand more, and appreciate more. So please do not misinterpret this post as being in any way irreverent or misguided. Having participated in the National Consortium for Teaching About Asia last late winter, I realized how much I don’t know.

That being said, I feel that I am not the only one who struggles to understand both Western and Eastern cultures, and put my own interpretation out there. Almost a year ago I came across this beautiful animated film by Nina Paley called “Sita Sings the Blues.” Nina put her heart and soul into this piece, and it is incredible. However, she made one mistake: she didn’t realize the music she used was still copyrighted, and the owners of the music said “No-No, Nina…you can’t use this.” So, she’s licenses under a Creative Common License for all the world to share. It is a classic love story – faithful Sita, slightly arrogant but magnificent Ramayana…and trustworthy and steadfast Hanuman. 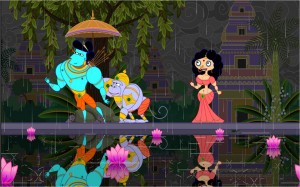