For as long as mankind has been trying to distance himself from his natural, woolly, and animalistic nature, he has also been trying to let it out of its cage from time to time. Off leash. Out of the pen.

There are many mythological creatures that are half human, half something animal, vegetable, or mineral, but perhaps none so archetypal as the minotaur: a man’s body with the head of a bull, this is the ultimate macho figure. Bulls represent raw, brute strength. Cows are the docile, grass-chewing milk givers. Bulls are the bad boys, and women love bad boys. I can just envision it now:

Ariadne to Theseus: “Oh, you are so dreamy! Oh, my father never lets me have ANY fun, so will you take me away from here if I help you? You are so-oooo cute!”

And then she proceeds to save the beefcake Theseus from this: 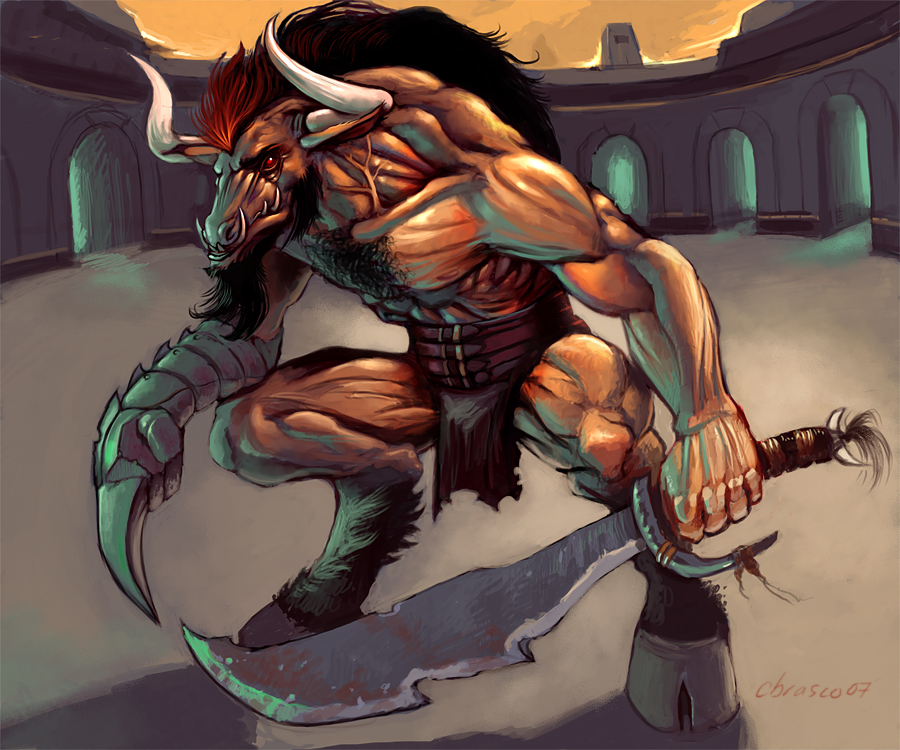 Theseus is the most famous hero of Athens. His mother was Aethra, daughter of King Pittheus of Troezen. His father was either King Aegeus or the Poseidon, the god of the Sea.

King Aegeus was unable to have children from his first two wives. He consulted the Oracle at Delphi for an answer to his problem. Aegeus did not understanding the oracle’s answer which was in the form of a riddle. Aegeus went to the wise King Pittheus to find the understanding. Pittheus understood the riddle but did not reveal it to Aegeus. Instead, he got Aegeus drunk and took him to his daughter Aethra to lay with. That same night, unknown to Aegeus or Pittheus, Poseidon also shared the bed of Aethra.

When Aegeus left, he put a sword and sandals under a rock. He left instructions with Aethra to tell his son about them when he was older. She was to tell him to move the rock and bring the sword and sandals to Athens so Aegeus would recognize his son.

Theseus grew up to be a strong and witty young man. When he was old enough, he attempted to move the stone under which his father had buried the sword. He was unable to move it, so he built a pulley system to lift the rock. With the pulley system, Theseus was able to retrieve the sword and sandals.

He set out for Athens overland. He was advised to take the much safer boat route but refused. Instead, he traveled through the dangerous Isthmus of Corinth. On his journey, he encountered many evil men who preyed on travelers. He defeated them all, making them suffer the same fate they would bestow on their victims. By the time he reached Athens, he was famous for his deeds.

King Aegeus did not yet recognize Theseus as his son, and he was worried that this popular young man might try to steal his throne. To prevent this, he sent Theseus on a mission to kill the Marathonia Bull and bring it back to Athens. Theseus caught the bull and returned it to the king. The king’s wife Medea, who was a sorceresses, recognized Theseus and suggested poisoning the young hero. King Aegeus recognized the sword Theseus was wearing just before the poisoned wine was given to his son. Medea and her son were banished from the kingdom for their part in the plot kill Theseus.

Several years earlier, Crete attacked Athens. To ward off the attack, the Athenians had agreed to pay a yearly tribute of seven boys and girls to feed a Minotaur. The Minotaur was a monster with a head of a bull and body of a man. Theseus offered to be one of the men to be given to the minotaur. When Theseus arrived in Crete, Ariadne, the daughter of the king fell in love with him at first sight. She gave him a sword and spool of string he could use to find his way back out of the labyrinth which the Minotaur lived. Theseus went into the maze and found the Minotaur sleeping near the center. He killed the monster and escaped with the others from Athens.

Theseus, along with hi fellow Athenians and Ariadne, escaped to their ship and headed back to Athens. On their way, they stopped at the island of Dia. Some stories suggest that Theseus abandoned Ariadne on this island. Others say the god Dionysus stole her away. In any case, Theseus headed back to Athens without her.

Theseus had forgotten a promise he had made to his father. The ship carrying the fourteen Athenians always flew a black flag. Theseus had promised his father to change the flag to white on the voyage home if he had survived. Aegeus, seeing the black flag threw himself into the sea, believing that his son had died on his mission. The sea was named the Aegean in his honor.

|Due to his father’s death, Theseus now became the king of Athens. He was credited with moving the government to a democratic style of governing.

Another story for which Theseus was famous was for his attempt to court one of the daughters of Zeus. Theseus set his sights on Helen, a princess of Sparta. Theseus, along with his friend Peirithous, was able to abduct Helen from Sparta when she was only ten years old. In return for his help, Theseus agreed to assist Peirithous to try and court another of Zeus’s daughters Persephone, the queen of the underworld. Theseus and Peirithous entered the underworld on their quest. To their surprise, Hades welcomed them in and asked them to sit down. They found out that Hades had no intention of giving up his queen, whom he had worked so hard to keep. They sat in chairs of forgetfulness and could not escape, being held there by each chair’s powers. It was not until Hercules happened upon them that Theseus was released. Hercules was unable to release Peirithous, and he had to remain in the underworld.

On returning to Athens, Theseus found that the Athenians were angry at him for his abduction of Helen. His throne was assumed by Menestheus and he was no longer welcomed in the city. He found a refuge with King Lycomedes (even thought the king envied Theseus) on the island of Scyras. While walking along a cliff, Lycomedes shoved Theseus off the cliff to his death. According to one legend, the image of Theseus appeared to the Athenians during their victory over the Persians at the Battle of Marathon (440 B.C.).

So, what a bunch of bull-oney. The princess saves the prince in this case through her smarts, and what is she left with? A big cow-pie. 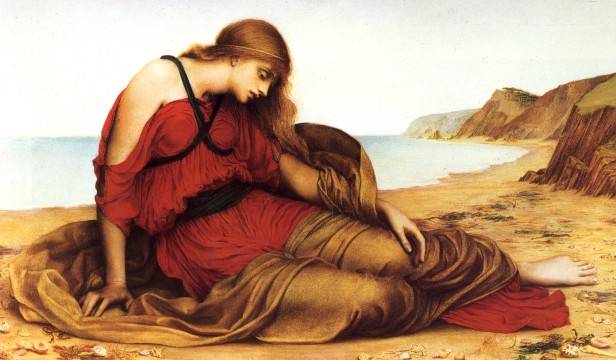 Get over him, sweetie. You’re a vegetarian anyway.