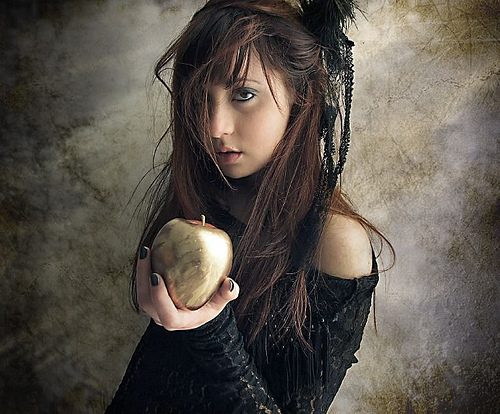 Hear the sound of those girl’s tears? Oh, poor baby. She has gained a few pounds and her best friend is cheating on her with her boyfriend. How do I know? I am Eris, the original ‘mean girl!’I’m the one who slipped the note in her backpack letting her know about the cheater, and who shrunk her pants so she would think she was gaining weight. Well, who did she think she was, anyway, trying to be friendly and cute to everyone around her, being kind hearted, patient, and sweet? Blech! Makes me want to barf! That syrupy-sweet act doesn’t play with me, sister. You had to be destroyed.

Oh, and I have friends in high places. Powerful friends. Ares, the god of war, my big, brawny and bold brother, always said I would go places, and he was right. He has his own issues though, ones I don’t think any amount of high-priced therapy will help. He was never revered by the Greeks, those country bumpkins, never had a palace or temple built in his honor, never had even as much as a lamb chop sacrificed to him. Those ungrateful peons! The god of war should be honored, worshipped—were it not for him, there would be stifling peace and prosperity, boring harmony and happiness! Well, between you and me, if he even got a scratch on his hide during battle, he would scream like a little girl! What a wimp. The only one who ever really showed him any affection was that tramp, Aphrodite. Granted, my brother is gorgeous, and she had a most unpleasant celebrity marriage with Hephaestus, that hunch-backed freak, so I don’t blame her for seeking my brother’s “affections,” so to speak. But violence, bloodshed and a great piece of weaponry beats out beauty, brains, and honesty any day, if you ask me.

I am the goddess of discord, disharmony, and discontent. It is my solemn and pleasurable duty to make sure there is always a little harmful gossip, a little bit of jealousy sprinkled with a dash of envy, stirred together well in a big, mucky pot of deceitful soup. I believe myself to be very powerful. If it weren’t for me, half the princesses in fairy tales wouldn’t get a prince worthy of them. If there is no conflict, there is no story! In fact, now that I think of it, all great literature, movies, and plays owe a hearty thanks to ME! If it weren’t for me causing the small problems, the self-doubts, the cat-fights, the tussles and tangos of human history, would just be flat, tasteless tales. You need a bad guy to make you love the good guy. I am indispensable.

One of my favorite tricks was tossing my golden apple in the middle of three of those witches, Athena, Aphrodite, and Hera. Athena, that book worm, wouldn’t know a good time if it jumped up and bit her on her fanny. Hera is such a matronly downer, always wasting her time checking Zeus’ credit card receipts for signs of cheating – as if! Who wouldn’t cheat on that old cow! Now, Aphrodite—there’s a chick who can give me a run for my money. She, of sea foam and blood, can really mix it up. She’s almost as much as a trouble maker as I am.

Funny, though. I don’t get a lot of invitations to places. Once I was so rudely dismissed, and didn’t receive an invitation to a wedding. I like to throw rice and toast the bride and groom, so why wasn’t I invited? So, I toss my golden apple, the Apple of Discord, which is one rotten apple, ruining the whole bunch, and whisper in the ear of this local-yokel, Paris, that he must decide who is the “fairest of them all.” (Yes, there’s a lawsuit against the Brothers Grimm for taking that line and using in that stupid story, Snow White. Really? Seven dwarfs? Don’t get me started!) The three ladies each want this golden apple for themselves, and want to be considered the fairest. Athena offers him wisdom. Paris never cracked open a book in his life, why should he start now? Hera offers him land, political power, and oh, yeah – ASIA. Not good enough. Paris doesn’t like sushi. Aphrodite, clever girl, offers him the most beautiful woman in the world, Helen. Here’s where it gets fun – Helen of TROY, as in, “Mr. & Mrs. Troy,” as in “she’s already married to a King Menelaus. And kings don’t give up their trophy wives without a fight. Just tossing my golden apple caused the Trojan War! Oh, those were indeed the days! I really admire Aphrodite’s greed, cunning and how to maneuver on the battlefield of beauty –that lady knows how to get what she wants.

A few years hence, I didn’t receive another invitation to a christening of baby Aurora. Well, I had to put that simpering chick to sleep for a few hundred years, let me tell you. One tiny prick of a spinning needle and lights outs, sister! Teach you to disrespect me! You might know her as Sleeping Beauty, and I as the evil fairy, but that’s a demotion compared to the stature of goddess. I regret that I didn’t keep my mental tools a little sharper and cause a bit more trouble along the way. Evil fairy, indeed. I know how to keep up with the times, and make my own invitations. Who needs Kings and royalty to have a good time, or a successful career? I had a prime cameo role in the hit cartoon, “The Grim Adventures of Billy and Mandy,” perhaps you’ve seen my work? I am fabulous!

Although I am happy with my life now—I still have everything I want, but it’s not the same. I’m a guest host on TMZ and a gossip columnist for the Los Angeles Hollywood tabloids. Whenever you hear a rumor about Brad-gelina breaking up, you can thank me! I have broken up couples that didn’t even know they were having troubles until I gave them the seed of doubt. I am the friend who say, passive-aggressively, “Oh, no those pants don’t make you look as heavy as your blue suede ones do!” My hair is naturally blonde; and my skin always tanned. Because I’m immortal, I never seem to grow old, but change looks so as not to arouse suspicion. I’m the one who’s responsible to making dimwits like Paris Hilton into celebrities. I’m the one who can cause suspicion and jealousy to slither into one’s heart, squeezing the trust out of you. Are you the fairest in the land? Well, it’s probably your best friend, and she’s stealing your boyfriend from you as we speak. Tee-hee!

One thought on “Troublemaker.”