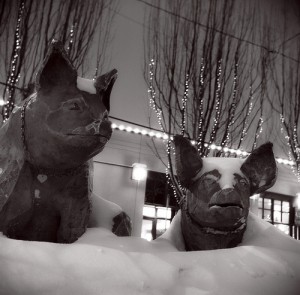 I don’t win a lot of debates or arguments with my husband. We either agree, or when we don’t, he’s usually right. I don’t know why. One of his skills is to keep facts and data stored, ready to use as a mental graphic, to prove points. He remembers stuff. I don’t remember facts and figures as much, or as well. But when I do, it’s burned into my brain like a brand. I’m more of a big picture kind of gal.

Today is National Pigs in a Blanketday. What does that have to do with arguments with my spouse? A few years ago we were talking about pigs in a blanket. His stance was PIABs are ONLY, and the TRUE, the HOLY GRAIL, of a meat product in a carb, the ONE AND ONLY WAY TO KNOW ITS TRUE DEFINITION is when a sausage link is wrapped by a pancake.That’s it. All other manifestations of this protein/carb gimmick food are false prophets of pork products. That’s what his mother told him, that’s what she served him, that’s what she served when she was a waitress, and that is how it is forever and anon amen.

Now, the rest of the European/North American populations would most likely disagree. Yes, PIAB do come in pancake form, but they also come in Pillsbury crescent roll dough and hot dog form, Vienna sausages (I can just imagine Mozart know, with a little porcelain dish of the diminutive delicacies, writing one of his operas), or one new way, wrapping sausage in bacon. (Sorry, PETA, I am not promoting this or denouncing this, just reporting).

I think I have written about this before. But no matter. The good news is we have really only had three arguments, but we do recycle them.

We humans recycle bigger arguments, too, and bigger conflicts. I wish every disagreement was as easily resolved.