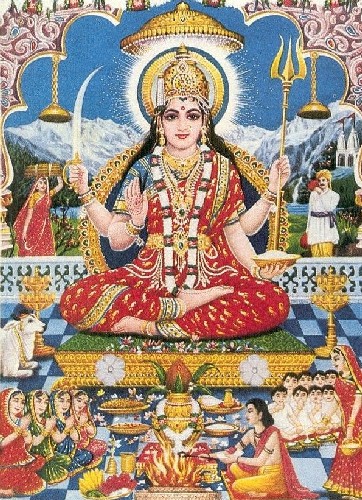 The Hindu goddess of love, and second wife of Shiva. She is Ganesha’s mother:

From Goddess A Day:

Ganesha’s first encounter with his father came shortly thereafter. Parvati had asked Ganesha to guard her cave and not allow any strangers to enter. Shiva, regretting his actions toward his wife, came to ask for her forgiveness, but Ganesha did not recognize him and would not permit him to pass. Shiva grew angry with this obstacle to his wife and, not knowing that Ganesha was his son, beheaded him. When Parvati discovered what had happened, her grief was immense, and Shiva promised to find a new head for his son. He could only find the head of an elephant, and used it to bring Ganesha back to life.

That must have been an interesting Mother’s Day THAT year, let me tell you! “Hey, um, sweetheart, I chopped off our son’s head, and replaced it with an elephant’s. But, he’ll be fine! Honey, you look fabulous in that dress. I made reservations!”

Parvati is all about forgiveness, and Shiva needs her grace and strength. But aren’t most moms about unconditional love for their families, even if there’s a nasty misunderstanding in caves?