Maybe reading this again may answer some of my burning questions, Drive by Daniel Pink. Here is an excerpt screenshot from my Kindle: 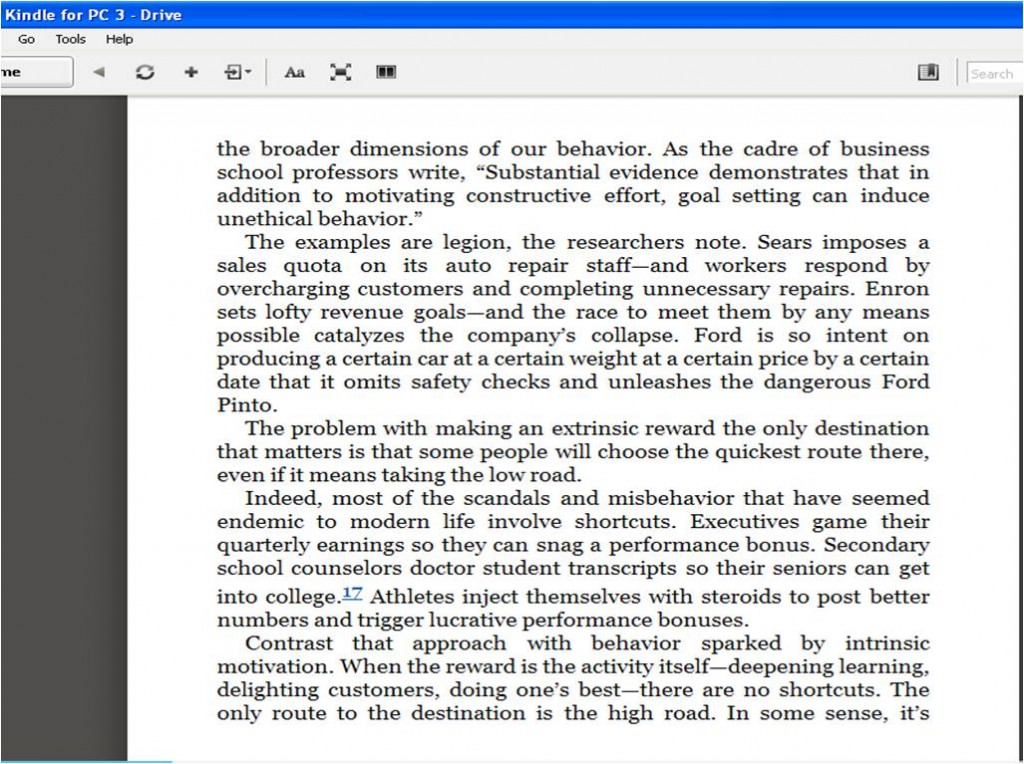 My burning question for today (with a side of meltdown, frustration, and melted mascara) is: Are we raising a generation of liars?

Covering a remedial math class this morning due to an emergency, the absent, ill teacher inadvertently forgot lesson plans for this small class. No worries: I asked the school secretary and she repeated what the sick teacher said, albeit it was intended for her other classes. Having paid my dues as a guest teacher while working on my Master’s, I pride myself on being able to think and act quickly walking into a classroom of unknown students.

“What are you working on now?”

After five minutes or more of interrogation, I finally got one semi-honest student to show me their green math workbooks.

“Okay, where did you leave off in the book?”

The roles devolved into me, the interrogator, the Spanish inquisition, to them, the innocent and righteous rebels, fighting for their freedom. Freedom from what exactly?

From the pain of not understanding 4th-grade level math?

Self-esteem and confidence issues aside, these students, (mostly one or two ring leaders who took it upon themselves to lead the others by the nose ) would not have a chance to practice very low-level math problems. Out of about eighteen students, perhaps three actually did what they were supposed to do without incident. I almost hooked one student by saying how good it felt to actually do a problem, solve it, and get the right answer–she almost got engaged. She was the little fish who got away. But almost doesn’t cut it when one alpha student decides she’s going to bully her into not completing her work. Those girls knew exactly where they were in the book, exactly what they were supposed to do, and spent the entire time with masterful work avoidance.

I want to say I can’t blame them: if the news or social media breaks through to them, which we all know it does, it’s full of falsehoods and fantasy. The fantasy and creativity I can handle: I swim in that soup myself, and it’s fun, engaging, and satisfying. I love to write, create, socialize, produce, and yes, talk. But sometimes the dishes need to be washed, and sometimes there is a moment when you need to learn how to reduce fractions. Sorry. And that is how a 14-year-old gets to 8th grade without understand fractions. We let them lie, and we lie to ourselves.

For example, we allow for this nonsense to happen (and it happens on every and all sides):

Republican leaders on Thursday slammed President Obama’s release of his detailed birth certificate as a distraction from the nation’s real concerns and attempted to point the finger at him for bringing heightened media attention to it.

If I was a Republican, Tea Party-er, or Libertarian, even I, right about now, would be tired of this silliness and snake oil. (Wouldn’t I?)

Just as I am a bit tired from my political philosophies constantly being challenged and crumbly.

I am a dork, and read everything, even my silly horoscope from time to time, like a fortune cookie. It’s taken about that seriously. Its generalizations and pseudo-science are just as dangerous for the ignorant mind as belief in oxymoron-ic honest politicians or jumbo shrimp.

My horoscope today (lies): You cannot hide your true intentions now that the Moon is in your sign, for others can see through your attempts at secrecy. Although being vulnerable makes you feel unsafe, your fears could be worse than any real danger. Don’t waste your energy protecting yourself from others; instead work to build your self-esteem so it doesn’t matter if anyone sees through your veneer. Honoring your integrity is the best way to assure your emotional security.

Own emotional security: how do we tell children that you really, REALLY will feel best if you have your own sense of accomplishment? How it really feels to just do the work? Get a little mentally sweaty from using one’s own brain to creatively solve problems and not creatively avoid them?

A teacher told me the other day that one of students said to her, “You know, failure IS an option.”

It sure is – perhaps we promote students who aren’t ready, thus perpetuating the lies. They learn how to hide behind others either with bravado or timidity, but there is a tell.

I see them: but at this point in the year, to still have to be turning over boulders to expose the bugs seems unfair to us all.

How do you handle this?

I want to be one of the back-up vocalists for this one: http://teamcoco.com/content/soul-singerrapper-plan-b-performs-his-song-she-said

My best friend’s father passed away. She and I have known each other since we were 13. I found out yesterday: the short, expressive email was truly heartbreaking. I didn’t, or couldn’t really process it until the drive in this morning. Every instinct told me to fly to her side and hug her, and just be there, and listen.

Still crying this morning, I think of how many people have to leave sadness or hurt on the threshold every day. Two funny, sweet students stopped by my room to give me some Easter chocolate. One saw I was upset, and then did this to cheer me up:* 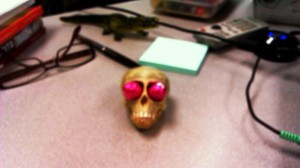 This is a replica of a monkey skull. Easter egg chocolates for eyes. These kids are masters at getting adults out of funks–it’s their full-time jobs in many of their homes. And that humor and sweetness can be their greatest survival skills. I learn so much from them.

*This is not about me–it’s about my friend, her mother, and her family. This was just my students’ effort to ease my sadness.

Written by
blog0rama
Posted in
New News
Tagged
nothing to fear

I have a lot of quotes in my room. Never a “hang in there kitty poster,” but a few little nuggets of wisdom. To keep things looking fresh, I move things around from time to time. I recently put a quote from Marie Curie outside my door, above my name plate:

Nothing in life is to be feared, it is only to be understood. Now is the time to understand more, so that we may fear less.

A student notices this quote, and has some bad news for me. Apparently, I spelled Marie Curie’s name wrong: it should be Mariah Carey.

Before I go on any further, you must know this post is in no way a mocking or eye-rolling response to the student–far, FAR from it.

This is about my contemplation of late regarding parents, and parenting skills, tools, and the importance in education.

I am not a perfect parent. As my dad always said, “The most important job in the world is given to amateurs.” That may or may not be original with my father, but if you knew my dad you would know he deserves the credit. I was fortunate enough as a young mother to be able to stay at home for a few years with our sons, and even then it felt overwhelming, lonely, and sometimes excruciatingly boring. I know that’s not the pink angels and roses “mom” thing to say, but it’s the truth. Hours combing over the same books, “reading” the images of Goodnight Gorilla repeatedly, or questioning the morality of Curious George (still am very ambivalent about that simian), could be mind-numbingly boring for me. But I wouldn’t trade a single second. And I know all that talking, pointing out, engaging, zoo trips, (still say Seattle is one of the best places in the world to raise children), Pacific Science Center excursions, and even just grocery store trips helped both my sons with language, experiences, and interactions that cannot be overstated.

So, I explain to the student who Marie Curie was:* 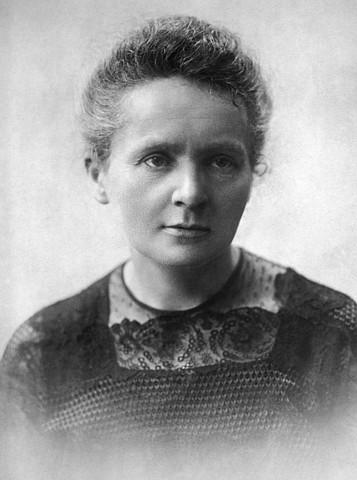 And that Mariah Carey is NOT anywhere near Marie Curie: 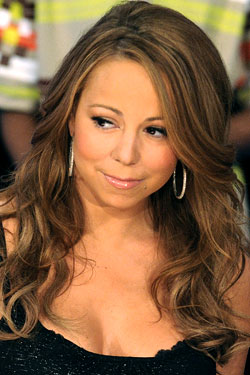 (Mariah Carey in a reflective moment…)

Now – on my random path, my husband sent me this link yesterday, because I basically had said the same thing as this commentator, that I would have LOVED to have been in the board room when this idea was pitched. Great minds, eh? In any case, exploitation, manipulation or neglect isn’t relegated to class or social status. Many parents have the means to educate and care for their children, and yet they choose not to. Many parents want to do as much as they can, but can’t afford to. I want to gag when I think of Hilary Clinton’s “takes a village” quote, but sheesh, people!?

Next, are you going to tell me to “hang in there?”

How about we make a deal–all of us? You, me, students, administrators, etc.: You read and talk to your kids when they’re little. Tell them the teacher likes them, maybe even loves them, almost as much as you do; if you don’t know how to read, look at picture books without words when they’re tiny; show them how to hold a book, turn pages, and snuggle on your lap, even for fifteen minutes. Turn off the TV. Dress them safely and warmly. Try to feed them good food for their little hearts, tummies, and brains. Get help when you need help. The key part to that quote is “THE MOST IMPORTANT JOB IN THE WORLD….” You may be an amateur, but we all are. You don’t need a professional to raise your child, like a doctor or teacher. You may need their care and support, but this is your job. Now, professionals: do your job. Help parents. Support them. Know that they are doing the best they can.

*I definitely consider this part of my job, by the way.