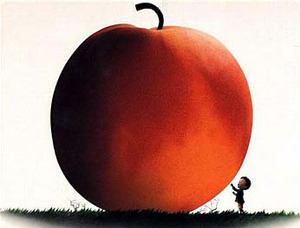 Today we had a special assembly and focus put together by the PE Department, “Wellness Day.”  The various content area teachers provided our support by creating lessons around healthy nutrition, etc.

Well, as important as all that is, my own take was to have students start to think about how food is used by writers in stories, and immediately thought of James and the Giant Peach by Roald Dahl. I love the movie adaptation, done by the same stop-motion animator who did Coraline and Nightmare Before Christmas, Henry Selick.

In researching a quote from the book (my copy is at home, safe and sound), I came across this Wikipedia entry:

James and the Giant Peach is a popular children’s novel written in 1961 by British author Roald Dahl. The original first edition published by Alfred Knopf featured illustrations by Nancy Ekholm Burkert. However, there have been various reillustrated versions of it over the years, done by Michael Simeon for the first British edition, Emma Chichester Clark, Lane Smith and Quentin Blake. It was adapted into a film of the same name in 1996. The plot centers on a young English orphan boy who enters a gigantic, magical peach, and has a wild and surreal cross-world adventure with six anthropomorphic insects he meets within the giant peach. Originally titled James and the Giant Cherry, Dahl changed it to James and the Giant Peach because a peach is “prettier, bigger and squishier” than a cherry.[1][2]

Because of the story’s occasional macabre and potentially frightening content, it has become a regular target of the censors and is no. 56 on the American Library Association‘s top 100 list of most frequently challenged books.[3]

But who in their right or otherwise mind would challenge this book?

Roald Dahl was a brilliant writer. His stories are sublime modern-aged fairy tales that expose the terrors and horrors of childhood. Children are in danger, all the time, in great peril caused by forces beyond their control.

So, to those of you who challenge these sorts of books, would you please consider this: do something else. Stop war. Be peaceful. Think. Make sure children don’t get hurt or exploited. Adhere to your moral compass. Don’t embrace ignorance, but choose love and knowledge.

Now – back to literary analysis. The peach may symbolize motherhood, nurturing, warmth, and love. Roald Dahl didn’t choose a peach by accident. It’s not James and the Giant Orange, or Apple, did he? (Although I think a kiwi would work.)

Think about food in stories. It will nourish you well.