There is a Blizzard Entertainment computer card game I have played a lot this summer. Why? I don’t know. Why do you play Candy Crush sometimes? We are chickens pecking for grain, all I suppose. The game is called Hearthstone(TM), and it’s a lot of fun. Kind of. It reminds me of something Harry Potter might play, a magical card game. And, it’s just challenging enough to engage me in small doses, and simple enough to have a few “wins.” Players can choose to build decks from the standard World of Warcraft classes: hunter, mage, warrior, etc.But there is one deck that I hate to come up against, and that’s the Priest deck. I have been most successful with mages and paladins. But priests: priests are what gamers dub “OP” – over powered. They have several cards that destroy low cards, obilterate high cards, card spells that double the health of a card, steal cards from your deck in several ways, and take control of a minion. Every time I put down my  Ragnaros card (Duh! Ragnaros is an evil fire lord!) that deals 8 damage at the end of every turn, I hold my breath that it doesn’t get taken by the priest player. And inevitably it does. As much I have lost to priests so often that many times I’ll just hit the ‘concede’ button and go down a rank versus go through the protracted dance of failure. I know it will only end in tears.

This begs the question: why don’t I play a priest deck? I have, on occasion, but it’s not all that interesting. It’s predictable bullying, and not a fair fight. Give me a spicy round with a warlock using murlocs and imps any time with my frost bolts and polymorphing spells, and win or lose, game time was much more fun.

I’ve lost you, I know–there is a point here.

So, summer time. My summer break. Yup. Yup. Yup. I haven’t felt like reading, haven’t felt like doing much of anything, really. I didn’t want a list, didn’t want to accomplish anything, do anything, or think about anything. I’m not sure what’s wrong with me, but my usual busman’s holiday of creating hours of lessons and teaching materials went on ice for the month of July. I did some things, sure, things I wanted to do, like start a new blog, and purchases my annual stacks of composition books. I paid for those composition books out of my own pocket, instead of taking my sons out for some burgers or buying new cute shoes. Small issue. No big deal. We’re happy. It makes me glad to hand those composition books to students, and then years later have one wonderful student she still has hers. Worth every penny.

Toward the end of last school year, my principal wasn’t sure where she was going to place me. Since so many highly qualified teachers left our building (and many the profession altogether) I was one of the few who had double highly-qualified capacity to teach both social studies and language arts (ye old humanities, folks) but the stipulation would be I would go back to 7th grade. I sobbed at the end of last year, sitting in the young, new counselor’s office, expressing how I felt I was being ‘punished for being good.’ All I wanted, for my upcoming 9th year, was just two years in a row of not just consistency, but crafting and honing lessons. JUST ONCE, to see what’s it’s like to take reflections, copious notes, plans, ideas, and make it really start to click and work. I’m a ‘good’ teacher, and good teachers always want to be better. There is no raise, no bump in pay, so monetary rewards are non-exisistent. My principal told me when I stopped in her office that she (jokingly) didn’t want to hear me whine for another year, so I was staying in my 8th grade position.

Haha. Not quite feeling respected, but respect doesn’t come from anyone else in our fair profession.

So many teachers left our building, many because of health issues. One young man left after one year because he, well, just wanted to teach at an “easier” school. Can’t blame him. These teachers are not retiring, they are not middle-aged, they are not going off into the wild blue yonder–primarily they are young women who are being thrashed, harassed, and undermined at every turn. I myself just had two years of ‘mysterious’ ailments, both resulted in minor surgeries. (We’ll leave it at that.) There is buzz that there’s going to be a teacher shortage, that many who would have gone into the profession simply won’t, or leave after five to seven years. If not for the genuine admiration I have for my students and colleagues, and the collegial interactions I’ve offered, and gained, I’m not sure how much personal professional stamina I could maintain.

Teachers leaving or not entering the profession in the first place may have many other factors, too – changes in demographics, women are trending to be better educated than men (even though paid less) but the traditional female teacher is a thing of the past. What I fear is that teachers are going to be a thing of the past, period. Programs such as Teach for America are not all horrible, but they are a corporate avenue to get teachers in classes fast.  This has potential for high turn-over rate, which if Campbell gets her way, will be what happens when veteran teachers lose and have no voice. A high turn-over rate for teachers is harmful for students (and I thought she was doing this ‘for the children’). It’s harmful for adults, too. I and my colleagues have often joked that we felt like children of divorce we’ve had so many principals: six in eight years. As they climb up the educational career ladder, we dig their heels out of our skulls.

From Ingersoll’s paper, “Is there really a teacher shortage?”:

Note that the highest turn-over rates are in private schools, so I dug a little deeper. Brown wants to abolish unions so that tenure is gone. All right. It is difficult to dismiss a ‘bad’ teacher, and thank goodness. It takes years of education, training, and continually investing in one’s career. My student loans are the tip of the ice berg. The pencils, paper, supplies, fees to take my boards, fees for multiple tests, thousands of dollars I’ve invested in myself as a professional, not to mention thousands of dollars of novels in my classroom library. I am not exaggerating. If I didn’t have a strong union behind me to back me up in case I get a vengeful administrator or sniping parent, I would have left a long time ago, have no doubt. The low salary vs. security is the trade off for many of us. In other words, I don’t mind being paid low for my level of education and investment as long as I know when I set up my classroom this fall my expertise and skills will be valued, and not having to stress about being capriciously fired. I’m too busy trying to emotionally disarm a student who jokes he has a gun in his locker. That’s stressful enough. 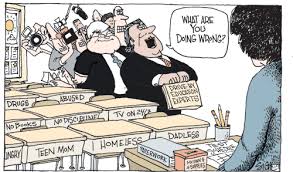 I felt this despondency the other day– my husband makes exactly three times what I make, and thank heavens. We are striving to maintain middle-class amenities. We don’t have new cars. We are trying to pay for our eldest son’s college so he won’t be burdened with student loans. I have the student loans in our family, upwards of $40,000. I keep having to defer them because of other financial crisis that pop up. I have three times the education my husband does, and make three times less. I knew this going in, I did. But knowing something and living something are two very different things. And it was fine for many years. There is the ‘profession’ of teaching, and there is the ‘job’ of teaching. I still love the profession, it’s the job that’s wearing me down. I’m doing my middle-class job and being told I stink.

We teach so many lost children, and it’s my mission this year to make full-on concerted efforts to reach to parents more than ever. I will do whatever I can to support them, ‘have their backs’ as it were. Because no one else seems too, least of all Campbell Brown. Where is my team of lawyers to back me up? How can this group continue to tout itself as ‘for the children’ yet they are spending so much money that will more than likely further to marginalize children?

So when Campbell Brown gets on the Colbert Report and begins her opaque and condescending agenda about teachers’ unions, I cried. I startled my younger son, because we were all just hanging out and having fun, watching Colbert, laughing, and then she comes on. It made me sick with anger. It was what she didn’t say that upset me. In all of her dart-throwing, where were her answers? Tearfully dismantling unions, and then what? What next? Okay, kids! No more school to be hurt by all those bad teachers!! Her misguided agenda is dangerous. My flash point saw red, and that’s all there is to it. She drained my mojo.

Are there bad teachers? Of course. There are bad parents. Bad doctors. Bad principals. Bad people everywhere. People who run the gamut of simple incompetency to outright criminal acts. I had those bad teachers: the geometry teacher who drank gin and read the newspaper. The pot-smoking social studies teacher. My husband had one who sold hand-made jewelry.

Many of my conservatives friends say I’m too emotional. They start throwing rhetorical words at me like that shields everyone from the conversation. Here is who I am: I am an emotional person, and I am fair, too. I am do not draw my opinions along party lines, far from it. I draw my opinions from my own life experience, observations, research, and a uncanny sense of spotting someone’s shenanigans. Please do not think this has anything to do with plastic politics or labels. I know a dangerous person when I see her. And you should, too.

To be fair, maybe there are issues in New York state I don’t see. Maybe their unions are thuggish and slow to respond. However, the national trend of Common Core and (over-testing) national testing standards, and revamped teacher evaluations allow for scrutiny of teachers more than ever before. Meaning, Brown’s fighting ghosts. There are pay scales, equal benefits, and requirements, no matter whether we are at a ‘tough’ school or an ‘easy’ one. (Like children, I am not sure I believe in tough versus easy: all teaching is challenging.) We are held to the same standards. The new teaching evaluation system is crippling thorough.  I can’t share the materials, but I’m sure I can share a link –it is the Internet after all. The rubric for teachers’ evaluation is over 35+ metrics long with five categories. Is that what you have for your evaluations at your job? Or is it more simplified? Do you get a cost of living increase? I haven’t.

Ms. Brown: unions are not your enemy. But you are mine. However, I’m not going to worry about you. You can side-step where the money’s coming from, I get it. That’s what all over-powered people do – lie about funding, agendas, and stand behind prattle “it’s for the kids.” I’m going to put my energy to positive use – all I can do. And turns out, it’s pretty powerful. When it comes to effective teaching, like parenting, consistency, security, and maintaining continuity of culture. They will never meet another person like Mrs. Love.