There were two scuffles in Minecraft Club on Friday.

This is unprecedented. Minecraft/Anime Club has never known any level of violence, unless that time when “CHEEZEWHIZZZZZLENOOOOOOO!” from a PVP round that ended poorly counts.

Minecraft Club happens on Fridays. This year, though we are not ASB sponsored (because I just don’t want to fill out the paperwork, mmkay?) I made sure every student filled out a parent permission slip with a workable phone number. I try to have the kids sign in, too, but usually it’s the same crowd. There is a new young man, and something…not sure what…was said between him and another, some prank gone wrong, some injustice delivered, and next thing I notice the posturing and the static in the air, and though they both ignored repeated orders from me to “step off/away/back up” eventually they moved away, and one (I believe who instigated the conflict) apologized to the other. It was not accepted. The shoulder was cold, and the handshake left unclasped. Chivalry and humility was met with coldness and a glaring shrug.

And then at the end of club, after most kids had gone and I’m left picking up broken pencil halves, wads of  paper, and the odd candy wrapper, a child hands me a cell phone and says “My mother wants to talk to you.” Janitor is vacuuming, it’s noisy, and immediately I can tell the mom is not happy. Basically, some kid ripped the zipper on her son’s backpack and “what am I going to do about it?” I’m going to replace the backpack and make sure I find out who did it. Does it matter that the backpack in question is already ripped and old? Nope–because it did have a working zipper ten minutes ago. The mom seemed satisfied with my answer, and I asked the student if he knew who it was, and no, no details except for clothes, glasses, and race. I’ll find the zipper-ripper, have no doubt, but in the meantime and not too thrilled with my Minecrafters at the moment.

But these acrimonious assaults on zippers and punky pranksters, on the last day of this week seems to sum up an overarching trend…an amalgamation of acts of tattling, treason, and trickery. As the journey progresses through this year, one thing I’ve noticed about the seventh grade students versus the eighth grade is their sheer, unadulterated willingness to tattle. This is something eighth grade students will not do, sometimes to their detriment (they don’t tell when they are being harassed, intimidated, or destroyed emotionally. Snitch culture bites hard with this crowd, and their relationships with one another rule their playground politics.). In our district sixth grade is still kept in elementary school (though there are plans to change this). What this means is kids, fresh from the cultural ties of innocently defending their rights and the rights of their friends will openly speak up and inform on one another in the name of justice. It can be both refreshing and irksome, as I personally waiver between their rights to a safe environment, and learning how to negotiate personal relationships/conflicts on their own. I asked the victim of the great backpack ripper caper just why he didn’t tell me right away, but he didn’t really know. I was there, present, but talking with a teacher, and nothing seemed out of the ordinary. When the mom asked to speak to me I thought she was going to tell me “Thanks for having this club! I’m running a few minutes late, would you mind waiting a few minutes more?” Oh well. I don’t blame her one bit: backpacks and supplies are expensive and time-consuming to acquire. I’m right there, too. Put on my best customer service voice and proceeded.

The kids in Minecraft often get over excited–and to my credit I did notice the sea change when the first two boys started posturing, just not a zipper being torn. Kids fiddle and break stuff constantly. They snap pencils, shred paper, leave tops off of markers and glue sticks, etc. They’re stressed and fidgety. And if another child’s ‘stresses and fidgets’ encroaches in their space, sparks and static fly. And often a tattle follows:

“Kids tattle because they’ve developed a strong sense of right and wrong and they start policing other people,” says Walfish. Tattletales suffer from an overdose of conscience.

Don’t think teachers do the same things? They sure do. I have been tattled on and have tattled, at least I think I have. No, of course I have. There are greater or lesser degrees of this –one year when Secret Santas came around I spoke up on behalf of a friend who was getting treated shabbily, and I asked if we could reset the norms and expectations for one and all. Most of the times we grown-ups step on toes, get misunderstood, or hurt someone’s feelings, we have the maturity to talk it through. We know that everyone has stuff, and I believe we try to look at others points of view, or try to be empathetic, even if we don’t see a direct cause for insult or injury. Is this naive of me? Yes, perhaps it is. If I have given it my best and every effort to talk to someone about an issue I am aware of explicitly/directly, or even if my spidey-senses are tingling and it’s just a “hunch” that something is wrong, then I can sleep at night. Advocacy is the best frontline resolution, for both tattled and tattler. 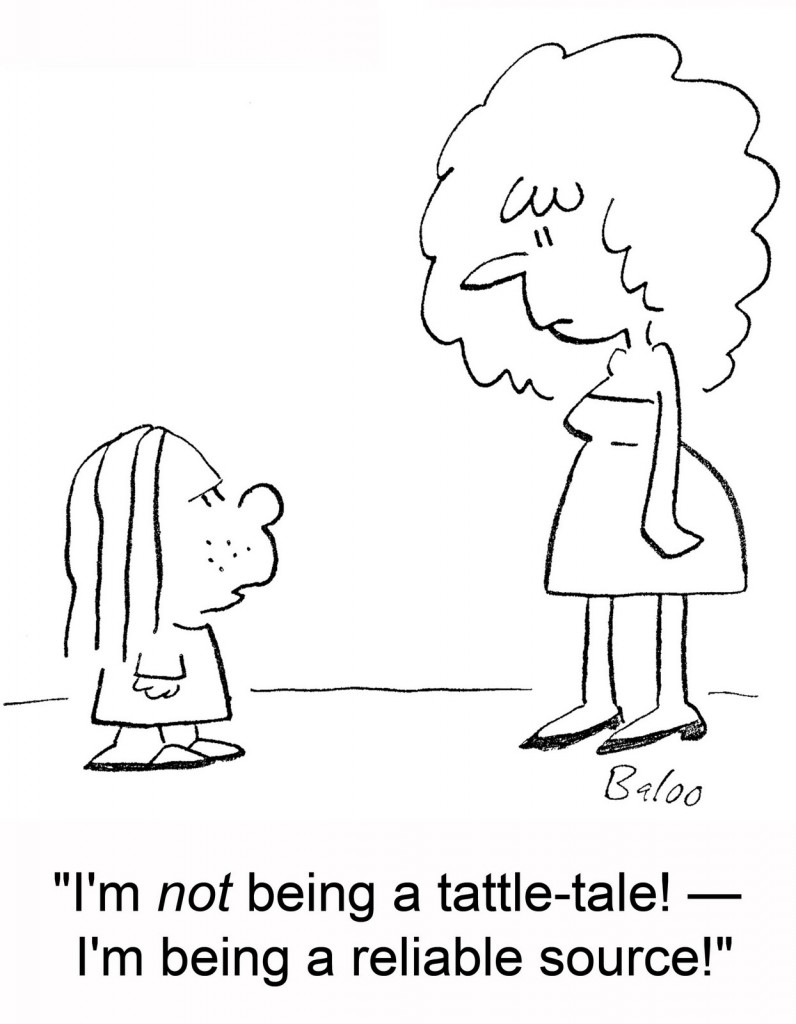 If this sounds silly or trivial, it’s not. These feelings of miscarried justice begin to fester, and can cause serious community issues in a classroom. It’s important that those who are trying to do the right thing maintain anonymity, because once it’s no longer tattling but something dangerous, out of place, or potentially harmful long term, that ventures into harassment and bullying territory. The person who feels wronged has their personal truth, which may become increasingly distorted the more isolated they feel. However, it’s important that that all of us consider if the hill we’re fighting for is the right one in the first place, and then advocate for ourselves, and then others. Maybe I’m just in too deep with my unit I’m creating on the Salem Witch Trials, but dang that mass hysteria is kind of a bummer. In the meantime, I’ve got backpacks to remember and pencils to gather, and see what I can salvage for this next week. It’s October, and apparently that’s ‘cry in your car month’ for teachers.