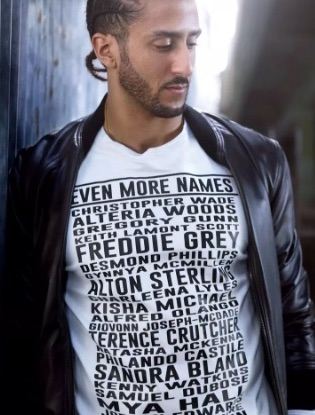 I am not a fan of Ayn Rand.

Clearly, this is not an image of Ayn Rand.

There is a name on this T-shirt of someone I have seen. I didn’t know him, but my colleagues did. His name is on our gymnasium wall as an athlete of the year from a previous time.

A few months ago at a gathering, a dear acquaintance stated how much she hated Colin Kaepernick. Since I was a guest in someone else’s home I didn’t pursue the topic nor challenge her opinion. We’ve already been divided and our friendship diminished by these current political times. She would be the first to say life is about choices, and she’s chosen identity politics.

And I cannot tag her in a social media post to let her know that one of my school’s former students, who was shot and killed by police, is another name in a long, heartbreaking legacy of names that many respectfully and somberly ‘take a knee’ for. Young men and woman of color whose lives were cut short in a nation of violent responses for prejudicial fear.

We all have this story. We all know friends, relatives, and colleagues with whom we now look upon with disdain and suspicion because of 1. their political views 2. their apathy which leads to 3. privilege –their personal endowment of their own rights to ignore what is happening because they don’t perceive it’s happening to them. It’s happening or affecting “others.”

That is not to say that those who chose to remain silent are not affected, nor does it mean they don’t help the affected. There are many teachers out there who may have voted for the current president, and believe themselves to be good people: they’re not, though.  They may coach teams, help struggling students, continue to give to charities, work long hours to create the best lessons and instruction they can. They’re working hard to help students read, write, tap into a love of science and wonder. (Well, maybe not science. That would be a hard cognitive dissonance working there.) But they can’t possibly be helping anyone if they support racism and bigotry, even if indirectly. Because there is nothing indirect about it.

My horrifying epiphany came when a few things came on my radar from varying social media teacher pages, this T-shirt, and just thinking about things in general: my own identity politics led me to believe that banning books is bad, censorship is always wrong, and we all need access to great writers.

Coming back full circle, I still believe that.

But I hate Ayn Rand’s works.

And I realized that teachers who use her novels in singularity, without commentary, juxtaposition or nuance may be selling students the same load of garbage I was sold when I was in high school. But now, more than ever, her novels may need to be taught so students have historical context.

In other words: some teachers are still teaching crappy novels, and posturing them as great works.

The same thread occurred over To Kill A Mockingbird. However, so many amazing educators provided critical analysis from authors about this seminal work. I love Scout, but I can also criticize her father.

It’s a mourning process when we revisit beloved texts and find out that they may not be the pillars of justice and societal right we once believed. And I guess my wish, my hope –is that educators, have the responsibility above all to make sure students know not what to think, but how to draw their own conclusions.

We are faced with students who come to us with very different political views than we have. There are conservative teachers who are making the more liberal child feel embarrassed. There are liberal teachers who may lecture only one side of an issue.

Please: help students curate and discover connection and nuances in thinking. Support them when they grieve the loss of a favorite media or text.

This is a daunting task. Just please: we must consider and reflect deeply on what we’re offering to students. There is too much anti-intellectualism out there in the ether for us educators not to be incredibly mindful of this. Be brave.