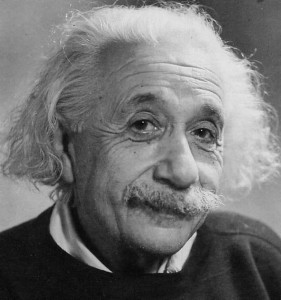 A few weeks ago, one of my favorite cousins posted something on Facebook that had questionable origins at best. The Internet has become a huge echo chamber for misinformation, maudlin parables, and a whole lot of cat videos. This particular story was an anecdote about Einstein and religion. It has no basis in fact. I put my husband on the case, a natural skeptic, fact finder and truth seeker. This is what he found:

First, this is obviously a fictional story written to support an opinion with junk logic. Modified versions of this same story are all over the web. Here’s a version featuring a Muslim student instead of a Christian: http://www.myiwc.com/forums/archive/index.php/t-3067.html

It’s interesting to note that for each of the 10 different versions I found, none had a byline by a reporter, an author, or credited to a source of any kind.

Second, the logic put forward by this fictional piece is outrageously flawed and it doesn’t require a big brain like Einstein to see through it. For example, to say that there is no such thing as cold, is absurd. Yes, we might conclude that cold is the word we use to describe the lack of heat, but that’s just splitting hairs over how the word ‘cold’ is defined! Let’s remember, the word ‘cold’ has uses beyond physics. It’s easier to say ‘it’s cold outside’ than to say ‘today’s atmosphere lacks heat at this altitude ‘. Further, we commonly use the word ‘cold’ as the opposite of heat because temperatures we consider cold or hot are on opposite ends of a continuous scale.

Third, this story posits that evolution has not been observed when, in fact, it has:

Fourth, this is a well known hoax, documented here:

Note: no biographical writing of Einstein mentions this event. Something as dramatic as this is intended to be would have made the pages of at least one of the thousands of Einstein biographical works made to date.

Ultimately, this was written by someone who has no understanding of how science works. It’s really just a poorly conceived philosophical story without merit.

Okay then. The story is a manipulative pile of horse apples. However, please do not misunderstand me or vilify me: I am not just about exposing questionable parables for its own sake. Something can FEEL true, even when it’s not. My hope is that if one is seeking spiritual guidance, trying to answer the BIG questions in life, or needs some healing for the spirit, remember that tolerance for ambiguity is a good thing.

Scientists are not this “other” species who are seeking to destroy faith and belief systems. In fact, many of the most ingenious scientists have been those who are passionate in their quests for both facts and truth, such as Carl Sagan, Marie Curie, William Herschel, John Dalton, and Gregor Mendel, just to name a few. There is no real debate or argument between science and religion. It’s like a celebrity death-match; completely fabricated to keep our minds off of the real questions, to distract us from our own journeys. Humanity is too good and big for these petty tussles, and the universe can shoulder it, too.

Next time, find a real anecdote, quote, or fact to speak your truth.

I have always liked this one: