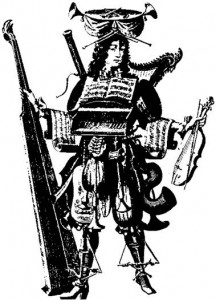 Yesterday was kind of a weird day. I normally don’t dislike Mondays, but yesterday, I did- I was feeling all Garfieldish and cranky (I am not a fan of Garfield, so even to allude to him demonstrates how Monday it felt.) I was still feeling work-lag from the weekend. Orchestrating every minute to get the most done possible on my current BIG project, the BIG expensive project, the BIG project that has only a 50% chance of succeeding according to “project” statistics, nothing I did played in concert. There was no synchronicity. It was all out of tune.

So, I faced Monday feeling like a failure. Adding to the weight of my current burden, others presented their burdens to me as well. A good friend advised me not to pick those up as well. Let them carry their own bags for awhile; I’ve got enough of my own gear to lug around, and I don’t have a place for it all. And I don’t know where the tuning fork went, but I believe it’s causing me some pain.

The BIG show is coming up–there is an end date. Everyone bought their tickets and the venue is sold out. And the reviews won’t come in for eight months. I’m practicing, creating, and writing to a group of faceless, nameless critics who are sitting in a darkened theatre, holding their applause. And my drummer just imploded, a-la Spinal Tap.

But, you know what they say: The Show Must Go On.

I just wish it felt more like a rock show than a funeral march.