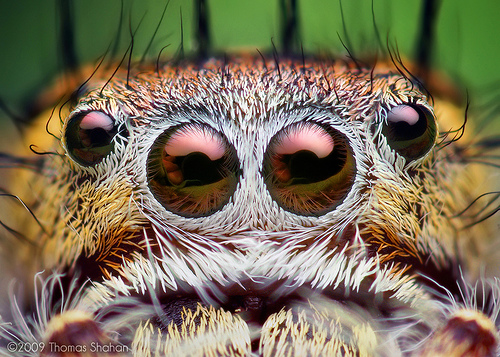 Here’s looking at you, Anansi!

Anansi, you old trickster! From the West African area, the Ashanti tribe originated the tales of the most famous spider-god of all, Anansi. Similar to the Coyote in Native American/Central American tales, Anansi is a trickster, a clever fellow who usually gets the best of his foes. (Usually, but not always.)

by Micha F. Lindemans
The Ashanti trickster/culture hero, also called ‘the Spider’. He is the intermediary of the sky god Nyame, his father, on whose command Anansi brings rain to quench the forest fires and determines the borders of oceans and rivers during floods. Later Anansi’s place as representative was usurped by the chameleon. His mother is Asase Ya. Anansi is sometimes regarded as the creator of the sun and the moon and the stars, as well as the one who instituted the succession of day and night. It is also believed that he created the first man, into which Nyame breathed life. A typical trickster, he is crafty, sly, villainous, but he also taught mankind how to sow grain and how to use the shovel on the fields. He set himself up as the first king of the human beings and even managed to marry Nyame’s daughter. He was beaten only in his encounter with the wax girl, to whom he stuck fast, having struck her with his legs when she refused to talk to him. The people then rushed forwards and beat the tricky Anansi.

Anansi is one of the most popular characters in West African mythology.

From Anansi’s stories and tales, developed the stories of B’rer Rabbit in the South:

B’rer Rabbit’s tales are an important part of African-American tradition.

These tales are immigrants to the new world, but have taken a character all their own. America has been a land where humor abounds and champions the underdog who often triumphs by his wits and ingenuity.Similar tales of the Trickster Rabbit and Anansi (Spider) are found in African folklore and travelled to the Caribbean and North America along with the slave trade. There have been numerous collection and versions of the B’rer Rabbit tales. They formed the basis of the Gullah – Nancy Tales in the West Indies …(http://www.eldrbarry.net/roos/books/amer.htm)

And I’m guessing Bugs Bunny came from those stories, too. But I’m just guessing.

I do know that one of my favorite writers, (even though in my opinion spends ways too much time Twittering about his hot,young girlfriend and all the awards he’s given, but hey, he earned them, so tweet on, Mr. Gaiman, tweet on) Neil Gaiman, uses Anansi in both his novels, American Gods and Anansi’s Boys.

So, everywhere we go, we take our stories with us. It may seem unlikely that a spider-deity can transform into a funny-bunny, but when cultural diffusion, assimilation, and acquisition is at play, anything is possible. Right, Neil? In other words, “What’s up, Doc?”

For more information about Thomas Shahan’s incredible photography, check this out: http://www.lightstalking.com/macro-bugs