Immersing my mind in close reading, analytical writing, and new content, there are a few more novels to mention. Not making any promises that I’m done, because we know a teacher’s work is never done. I am working on documents of lesson plans, frosted with CCSS goodness and fortified with with enduring understanding vitamins and minerals. (Yes, it’s past lunch time and I’m chugging Diet Coke–it shows.) In any case, if you would like the lessons as they progress, please send me an e-mail: karen.kelly.love@gmail.com 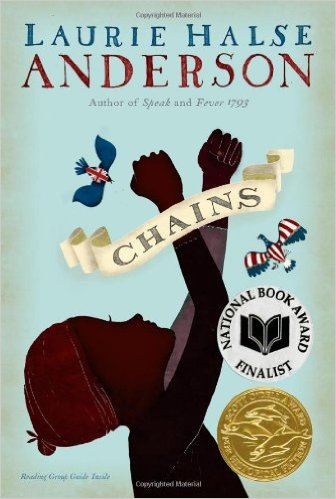 If an entire nation could seek its freedom, why not a girl?
As the Revolutionary War begins, thirteen-year-old Isabel wages her own fight…for freedom. Promised freedom upon the death of their owner, she and her sister, Ruth, in a cruel twist of fate become the property of a malicious New York City couple, the Locktons, who have no sympathy for the American Revolution and even less for Ruth and Isabel. When Isabel meets Curzon, a slave with ties to the Patriots, he encourages her to spy on her owners, who know details of British plans for invasion. She is reluctant at first, but when the unthinkable happens to Ruth, Isabel realizes her loyalty is available to the bidder who can provide her with freedom.

From acclaimed author Laurie Halse Anderson comes this compelling, impeccably researched novel that shows the lengths we can go to cast off our chains, both physical and spiritual. 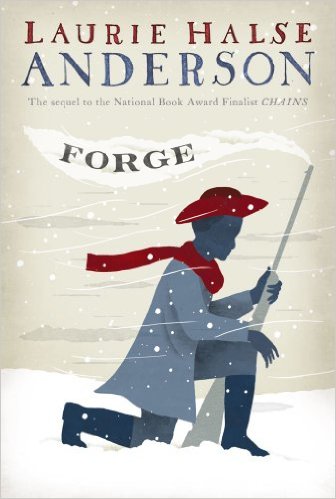 Blistering winds. Bitter cold. And the hope of a new future. In this compelling sequel to Chains, a National Book Award Finalist and winner of the Scott O’Dell Award for Historical Fiction, acclaimed author Laurie Halse Anderson shifts perspective from Isabel to Curzon and brings to the page the tale of what it takes for runaway slaves to forge their own paths in a world of obstacles—and in the midst of the American Revolution.

The Patriot Army was shaped and strengthened by the desperate circumstances of the Valley Forge winter. This is where Curzon the boy becomes Curzon the young man. In addition to the hardships of soldiering, he lives with the fear of discovery, for he is an escaped slave passing for free. And then there is Isabel, who is also at Valley Forge—against her will. She and Curzon have to sort out the tangled threads of their friendship while figuring out what stands between the two of them and true freedom. 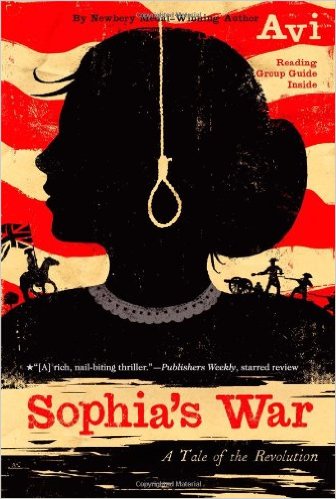 In 1776, young Sophia Calderwood witnesses the execution of Nathan Hale in New York City, which is newly occupied by the British army. Sophia is horrified by the event and resolves to do all she can to help the American cause. Recruited as a spy, she becomes a maid in the home of General Clinton, the supreme commander of the British forces in America. Through her work she becomes aware that someone in the American army might be switching sides, and she uncovers a plot that will grievously damage the Americans if it succeeds. But the identity of the would-be traitor is so shocking that no one believes her, and so Sophia decides to stop the treacherous plot herself, at great personal peril: She’s young, she’s a girl, and she’s running out of time. And if she fails, she’s facing an execution of her own.

Master storyteller Avi shows exactly how personal politics can be in this “nail-biting thriller” (Publishers Weekly) that is rich in historical detail and rife with action. 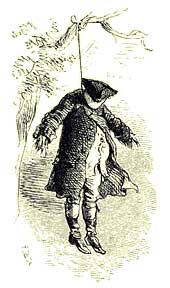 Links to my other resources:

There are more books through diverse lenses I have in my arsenal, so believe me when I promise point of view and perspectives on history are at my core.