The authorities in Iran continue to block the travel of the nation’s most prominent poet.

Last week, as she was about to board a flight to Paris, police seized the passport of Simin Behbahani, who is 82 and nearly blind.

Behbahani was interrogated all night long and then sent home — without her passport.

So far, she has not been charged with any crime. Neither the police nor the Revolutionary Court has asserted any legal basis for taking her passport.

‘We All Thought She Was Untouchable’

Through it all, she was not imprisoned and continued to enjoy the freedom to travel, says Farzaneh Milani, who teaches Persian literature at the University of Virginia and is one of Behbahani’s translators.

“We all thought that she was untouchable. And it’s amazing that a woman of 82, a woman who can barely see anymore, a woman who has brought nothing but pride for Iran, is now a prisoner in her own country,” Milani says. 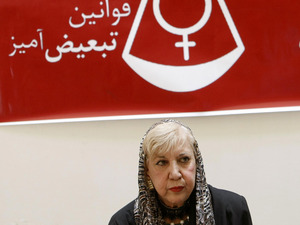 She looks very threatening, doesn’t she?