Talk about your bad hair day. 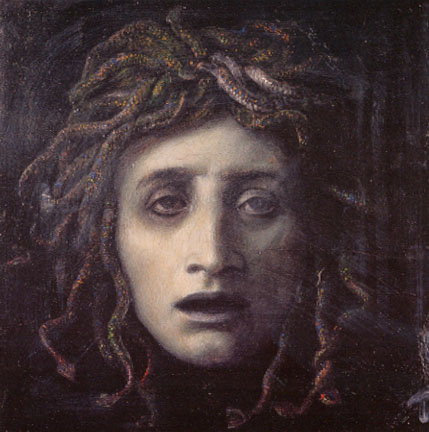 Once again, some goofy mortal chick is just hanging out, being beautiful, and some god takes an interest in her, and she pays the price:

Medusa, one of the three Gorgons, daughter of Phorcys and Ceto. She was the only one of the Gorgons who was subject to mortality. She is celebrated for her personal charms and the beauty of her locks. Neptune became enamoured of her, and obtained her favours in the temple of Minerva. This violation of the sanctity of the temple provoked Minerva, and she changed the beautiful locks of Medusa, which had inspired Neptune’s love of serpents. According to Apollodorus, Medusa and her sisters came into the world with snakes on their heads, instead of hair, with yellow wings and brazen hands. Their bodies were also covered with impenetrable scales, and their very looks had the power of killing or turning to stones. Perseus rendered his name immortal by his conquest of Medusa. He cut off her head, and the blood that dropped from the wound produced the innumerable serpents that infest Africa. The conqueror placed Medusa’s head on the shield of Minerva, which he had used in his expedition. The head still retained the same petrifying power as before, as it was fatally known in the court of Cepheus. . . . Some suppose that the Gorgons were a nation of women, whom Perseus conquered.

What strikes me are the explanations (in mythology) of “when good things happen to bad people.” Bad things happen because the gods and goddesses are meddling in mortal matters. The deities are not aloof, watching “off shore through heavy lenses” kinds of omnipotent beings. They are involved, they get in the mix, they cause trouble with their jealousies, infidelities, and revenge. Mortals are quite capable of causing enough problems, thank you very much. Do you think it’s fair that just because Poseidon/Neptune wanted to take a cutie out on a date that she should pay the price for forever with bad hair and stone-etching blood?

Well, I guess on a positive note, she and Poseidon did produce Pegasus, but that’s a horse of another color.