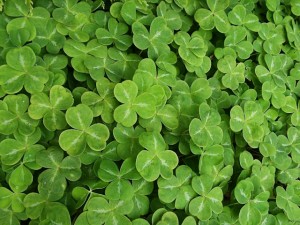 Today is St. Patrick’s Day. It was on this day in the fifth century — probably in the year 460 — that Patrick, the patron saint of Ireland, died. He was born in Britain to wealthy parents, but not much more is known about his childhood until he was 16, when he was kidnapped and sold into slavery in Ireland. He was a slave for six years, herding sheep, often alone. He wrote in his memoir Confessio: “I used to stay out in the forests and on the mountain and I would wake up before daylight to pray in the snow, in icy coldness, in rain, and I used to feel neither ill nor any slothfulness, because, as I now see, the Spirit was burning in me at that time.” He said that he heard the voice of God telling him to escape from Ireland, and then to come back as a missionary. He made it back to Britain, was trained as a priest, and then returned to Ireland. He wrote that he would have loved to go home to his family and his country, but that it was his duty to remain in Ireland, converting people to Christianity and baptizing them. There were few Christians in Ireland at the time, so Patrick tried to integrate traditional beliefs with the new religion, and legend has it that he introduced the Celtic cross as a way to combine the Christian cross with a symbol of the sun. Another legend says that he used the three leaves of the clover to explain the Trinity, which is why shamrocks are a symbol of St. Patrick’s Day. And March 17, Patrick’s Feast Day, has been celebrated as a religious holiday ever since.

But the green clothing and all-out festivities of St. Patrick’s Day are largely a product of the United States. The first St. Patrick’s Day parade was held in New York City in 1762 by Irish immigrants. These days, about 3 million people line up to watch the parade in New York, and there are similar huge celebrations in Boston, Philadelphia, and Chicago, where they dye the river green.