In the Simpsons’ episode, “Lisa Gets An A,”, Homer becomes discouraged by the price per pound of fresh lobster, and seeks to “grow” his own lobster for his consumption. However, he bonds with the lobster, caring, feeding, talking to it, and even taking it for walks.

As I’m watching the episode, it strikes me as odd that Homer would grow to care for his potential dinner so much that he would take it for a walk, but it’s funny nonetheless.

As most things, I didn’t realize really how clever the good writers of the Simpsons were at the time, until….

It’s a definitely a “grown up” book–she battles her long-standing deep emotional scars of her past. Her crazy, butcher-knife wielding mother and wild-cat, alcoholic daddy play key roles, and she must come to terms with her own choices, and try to improve on being a wife and mother, before it’s too late. She’s trying to find the power of prayer right now; and it dawned on me, that if you’re battling demons, you probably need a few angels on your side, in whatever manifestation that takes.

ANYWAY…..(sorry). There is a section where she ALLUDES to the father of surrealism, who, YOU GUESSED IT…used to take his PET LOBSTER FOR WALKS.

I thought I bookmarked that passage in my Kindle, but I didn’t. However, because of the POWER OF THE E-READER, I can do a search for “lobster,” and voila! It was “Apollinaire in Paris, just in from walking his lobster down the street on a leash.”

In fact, three instances of the word “lobster” appear in Karr’s novel: 1. lobster grip, location 2167; 2. lobster down the street, location 3392; 3. we boil lobsters and stuff ourselves with…location 4856.

So, now the reference to Homer being such as Apollinaire in the early 20th century Paris, is even funnier. I get it. And that is the power of allusions – increasing comprehension by increasing and deepening connections.

Now, I am even more curious. Who was the father of surrealism? And who was Apollinaire?

When I searched for the “father of surrealism” I found: http://www.vincesear.com/giuseppe-arcimboldo-father-of-surrealism/

Giuseppe Arcimboldo, who painted paintings such as this example: 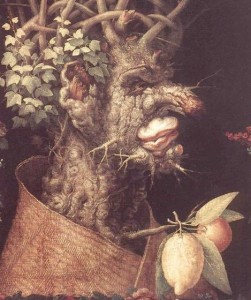 But, Karr is referring to Guillaume Apollinaire: http://www.poets.org/poet.php/prmPID/737

From continuing research, it seems like he liked to draw poems: 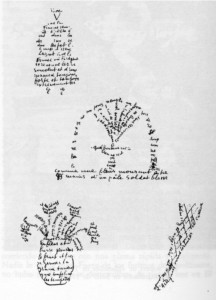 Today we call this Shape Poetry.

Want to know more about “surrealism?” Check this out:

Salvador Dali, Henri Matisse, Rene Magritte are a few artists who created in the style of surrealism. 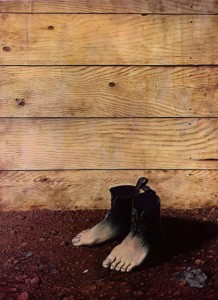