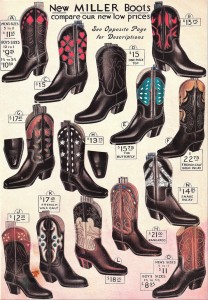 Recently, an esteemed colleague dispatched a plea requesting two pairs of used cowboy boots, sizes 11 and 12, for the run of a play. (She designs costumes, and is darn good at it.) She sent this missive on Saturday, the beginning of our shortened Spring Break, and lo and behold, received in abundance her request by the following Monday. Cynical me thought she might have to ask again, because not many people check their emails over the weekend, much less breaks, and certainly not during a shortened break, where teachers would be regrouping, reorganizing, and reaffirming as much as possible in the truncated time.

Admittedly, when making requests, my charm has not curried as much favor. I used to be charming. People used to like me. But I rarely ask anymore. I don’t want to be told “no.” It’s demoralizing and embarrassing. It’s made somewhat a Gollum out of me, “my precious…”

I understand and appreciate there are bigger issues at stake than what’s happening in my little swampy pond. Due to budget shortfalls, many districts are sending out surveys to communities requesting everyone make some tough choices (to me, it’s kind of like asking which little finger do you want chopped off, the left or the right?).

If I choose to buy pencils and composition books for all of my students, and then replace them as needed, that’s my choice. It’s not up to anyone to help out. When I choose to sweep and clean my own room because of budget cuts, it’s because providing a clean space for my day and my students is my priority, no one else.

Teachers are some of the most resourceful, creative, and innovative folks out there. We all roll up our shirt sleeves and lend a hand, if we can. It’s time to not only include them in the conversation, but perhaps actually listen. I can see how the divide happens, though. Teachers’ voices and opinions are often treated like children’s voices and opinions. Perhaps it’s that we never stop asking for things. Man, that must get old! We want smaller class sizes, we want to be paid a living wage, we want supplies for our students, blah blah blah. Our rooms are too hot, too cold, stepped on a rock, sun’s in my eyes! Oh, and does anyone have any shoeboxes? Soda pop cans? Collect all of the pencils after the test. Use department money to buy Post-Its. How much is my student loan payment again? How long can I get a deferment so I can stock up on pencils and composition books? (On that note: those composition books were the best investment I have made–no batteries that die, no lost chargers, no lost data.)

What’s my point? I don’t have one. I really don’t. I’m just being unattractive, but really–not ungrateful. Just because I admit that I want to be a spoiled, entitled brat sometimes doesn’t make me a bad person. I’m just being honest. But that’s a ‘be careful what I wish for’ kind of thing. I do appreciate the gifts and ‘just in time’ needs that are met when it’s thrown out there to the tribe. It takes the contrast of emotions to value the valuable.

On the last day of break, I’m off to Target to buy more composition books and pencils, my precious.