There are many stories of love-gone-wrong. And when women especially get their hearts broken, well, brother, you had better watch out. They change. They destroy. They…get…really…upset.

Today’s legend is the Japanese story of Anchin and Kiyohime. Just a couple of crazy kids, in love, planning a life. Until Anchin becomes bored, restless, and is ready to move on, literally and figuratively, taking his love on a boat ride…Well, that’s one version. Other versions say he was just hanging out, minding his own business, and Kiyohime mistakes him for her one true love, and turns into a snake/serpent to show that she is VERY DISAPPOINTED. Unrequited love hurts. Love scars. Love wounds, and mars. (Sorry– went back to 1974 for a second).

It’s not really a very old story, relatively speaking, originating circa 928: there are other older an newer stories that connect with this one, such as Medusa (the old “turn you into stone” thing), Circe (“you’re such a pig!”) and various harpies, sirens, Scylla, and Ariel. Yes, I said Ariel. Because in the original Little Mermaid story she takes the high road and doesn’t turn into a sea serpent, murderer, or even a a shrimp boat captain, but sea foam. Sea foam. Really, Hans Christian Andersen? Foam? Ultimately she turns into some kind of spirit that seeks out good children, because for every good kid she finds, it moves her closer to heaven:

The little mermaid lifted her glorified eyes towards the sun, and felt them, for the first time, filling with tears. On the ship, in which she had left the prince, there were life and noise; she saw him and his beautiful bride searching for her; sorrowfully they gazed at the pearly foam, as if they knew she had thrown herself into the waves. Unseen she kissed the forehead of her bride, and fanned the prince, and then mounted with the other children of the air to a rosy cloud that floated through the ether.”

“After three hundred years, thus shall we float into the kingdom of heaven,” said she. “And we may even get there sooner,” whispered one of her companions. “Unseen we can enter the houses of men, where there are children, and for every day on which we find a good child, who is the joy of his parents and deserves their love, our time of probation is shortened. The child does not know, when we fly through the room, that we smile with joy at his good conduct, for we can count one year less of our three hundred years. But when we see a naughty or a wicked child, we shed tears of sorrow, and for every tear a day is added to our time of trial!”

How’s that for some guilt? Every time you were naughty, you kept the little mermaid from going to her just reward.

But, let’s return to Kiyohime. The symbolic meaning of serpents, snakes, and reptiles is huge. People have been afraid of All Things Wiggly since the beginning of time. Dragons deserve their own day in the Myth-of-the-Month club, and their belly-crawling cousins, snakes. 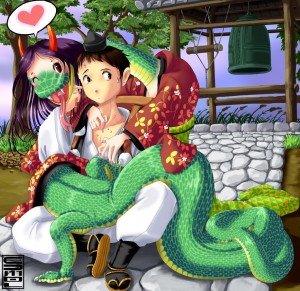 One perspective I found interesting is that Kiyohime is not really considered an evil being, just misunderstood (isn’t that right, gals?):

Kiyohime was not a villainess, even in folklore. The concluding words of Koi no tenarai, “The Learning of Love”, from the Nagauta cycle “Kyo Kanoko Musume Dojoji” paint a sensitive picture of a woman tormented by her love, and an unfeeling rejection from one to whom she considered herself bound.

The moral of the story is, sometimes when you love someone, they don’t love you back. Try not to be so clingy.

I’m not sure who originally wrote this website, but there are a lot of misspellings in it. However, you’ll get the gist of the story: http://www.dojoji.com/e/anchin/anchin.html

Here’s a synopsis of the story here: http://ccdl.libraries.claremont.edu/cdm4/item_viewer.php?CISOROOT=/cyw&CISOPTR=311