Pan – the little goat-man, lover of beautiful girls, and chaser of dreams. His presence creates panic in men because of his wild nature, the forces that cannot be controlled, when we lose ourselves to crazy behavior, mob rule, or “herd” mentality. When we act like sheep, Pan is the deity to blame.

PAN was the god of shepherds and flocks, of mountain wilds, hunting and rustic music. He wandered the hills and mountains of Arkadia playing his pan-pipes and chasing Nymphs. His unseen presence aroused feelings of panic in men passing through the remote, lonely places of the wilds.

Maybe that’s why over eons Pan morphed into a devil-like manifestation: from Greek mythology, he changed into something to be feared, a representation of temptation, debauchery, and evil. Mankind versus Nature has been an age-old conflict, and we all know which side Pan is on.

But perhaps Pan doesn’t deserve this reputation. Maybe he was just ‘green’ before everyone else was. He was a funky hippy dude, playing his flutes, hanging out with Mother Nature, and making organic feta cheese to sprinkle on his pita chips. Soap wasn’t his friend, per se, but animal instinct was his middle name. Pan is the free-thinker, the non-conformist, kind to animals, and not intending any harm. He has his share of heartbreak, too. Maybe if he had used a little deodorant…but there was no way to cover up that stink.

The mythos of Pan gave us other personifications of wildness, youth, and nature, not just the devil. We have the charming tale of never wanting to grow up, in J.M. Barrie’s Peter Pan, and of course, we all get a little ‘satyr but wiser’ with Phil, the trainer in Disney’s Hercules. 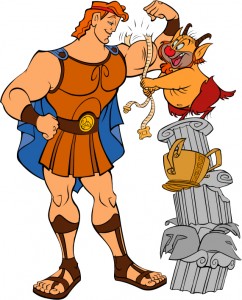 Pan is also featured in one of my favorite authors, Tom Robbins’ novels. But he’s not until you get to college.  Not that anything’s bad, just some more grown-up ideas. Sometimes experience does have its benefits, young ones.

So, when you’re feeling like you need some time to kick back, listen to some music, and just chill, thank your friendly neighborhood Pan for helping you get back in touch with nature. And, don’t forget: reuse, recycle, and reduce!