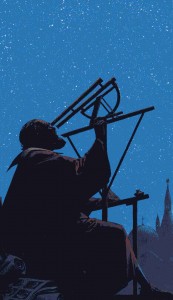 It’s the birthday of the Father of Modern Science, Galileo Galilei, (born in Pisa, Italy (1564). It was Copernicus who suggested that it was the sun, and not the Earth, that was at the center of the universe. But Galileo became a famous public defender of that theory, called heliocentrism. The pope and Galileo were on friendly terms, and the pope encouraged Galileo to write a book outlining the controversy. But of course the pope instructed Galileo that he must not promote heliocentrism, and asked that his own beliefs be represented. So Galileo wrote Dialogue Concerning the Two Chief World Systems, which purported to be a debate between two philosophers; but one of the two, Simplicio, sounded stupid, and it was this figure that acted as a mouthpiece of the pope. No one knows whether Galileo deliberately attacked the Pope — it’s probable that he just couldn’t write as convincing of an argument from a philosophy that undermined his own scientific beliefs. In any case, the pope was definitely not a fan of the book, and Galileo was put on trial for heresy. He publicly renounced his views, but he still spent the rest of his life under house arrest, and his books were banned.

Wow.  Talk about your author’s bias and purpose. Remember the other day when we talked about characters, and how writers purposefully and intentionally name their characters? Simplicio? Simple? As in simple-minded? Consider that when we begin fictional narratives in the next few weeks. The characters in your writing all matter, whether they have a major or minor role. And they are your creation–name them accordingly.

One more note: heliocentrism. Remind you of anything? Helios? Hmmmm?