This is something that’s been nagging at me a little bit–have you ever noticed that a hit book will come out, and then there comes a slew of wannabes? For example, when the Harry Potter series was published, and J.K. Rowling made more money than the Queen, publishers would have sold their own mothers to publish titles that were very similar genres and plots. Twilight has bitten millions of readers, and now anyone with a keyboard is dreaming up other traditional monsters to transform into anti-heroes with ripped abs and swooning heroines.

Well, maybe that’s not such a bad thing. Like plots, readers are, more or less, individuals. And even in a vat of vanilla ice cream, there are nuances to be found. (There’s French vanilla, homemade, Mexican vanilla, and birthday cake vanilla.) So, just because one kind of vanilla isn’t to your liking, perhaps another will be. And maybe you can have your cake and eat it, too–meaning, you can find novels that entertain, and add a little more to your life than before you read.

No matter what anyone tries to convince me otherwise, I still go back to Harry. I will defend the Potter series–no amount of sparkling vampires can compare. Sorry, Ms. Meyer–I know you’re secure enough in your belief in your talents and your bank account to take a little criticism. But it’s a flick of the wrist and a know-it-all bookworm witch, and jester/joker twins who enchant me. 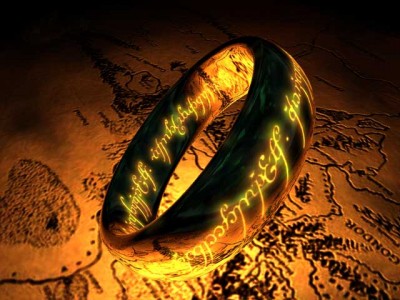 However, if you really want to go back to some authors who influenced the fantasy genre the most, you’ll have to go to the kings: Tolkien and Lewis. My grandmother was a fan of CS Lewis, but I never really delved into his works as much as I should; but Tolkien…oh yeah. The Hobbit, and the Lord of  the Rings trilogy was my first taste of being transported to another time and place, completely and wholly, in my mind.

It’s the birthday of J.R.R. Tolkien, (books by this author) born John Ronald Reuel Tolkien in Bloemfontein, South Africa (1892). His father, a banker, had moved to South Africa for work, but he died when Tolkien was four years old, and his mother moved the family back to England. They lived in a rural village outside the city of Birmingham. Train tracks went right beyond their house and young Tolkien was drawn to the Welsh names on the sides of coal cars, names like Nantyglo and Senghenydd. And his mom tutored him in Latin, and as a young child he was fascinated by the way that language worked. When he was eight years old, his mom converted to Catholicism, and her family was so upset that they disowned her. Now the family, which hadn’t had much money anyway, had even less.

And then, when Tolkien was 12 years old, his mother died from complications of diabetes, and he and his younger brother were put in the care of a Catholic priest. He went to a good school, started inventing his own languages, and formed a literary group called the T.C.B.S., friends who exchanged ideas and critiqued each other’s work. He graduated, got into Oxford. But before he started, he took a summer trip with friends hiking in the Swiss Alps, and much later when he wrote about Bilbo Baggins hiking the Misty Mountains, he used his memory of that summer in the Alps.

But as a teenager starting at Oxford, he had no desire to write fantasy novels. Instead, he was interested in language. He studied Classics, Old English, Finnish, Welsh, and the Germanic languages. He went to fight in WWI, spent four months on the Western Front and then got trench fever and was sent home to recover. All but one of his friends from the T.C.B.S. literary group were killed in the war, and to honor them and also to help work through his own awful war experiences, he decided to write down some stories. They were stories about elves and gnomes, but they were not cheery fairy tales — they were filled with war and violence and trenches dug under battlefields.