Written by
blog0rama
Posted in
Being a better teacher
Tagged
Department of Education, Devos, education, Federal money, what matters

Like most benign institutions, I assumed the Department of Education would always be there, doing its most important job: keeping the playing field field-y and the standards standard-y. But since education is under DEFCON 1 level attack, along with many of our Constitutional laws under the new, inexperienced and dangerous administration, the question was posed, “So what would be so bad if the DoE was abolished? What is the problem with state and local control of schools?” Good questions! And, since I didn’t immediately know the answers, but am always suspect of everything the Republicans do or say– because if it looks good on paper, it’ll probably burn everything down–I decided to dig a bit. Here are my findings (so far).

Day 1 on the job is done, but we’re only getting started. Now where do I find the pencils? 🙂 pic.twitter.com/0vRKF1opE9

Please forgive me. With many sites disappearing like dodos and buffalos, I copied and pasted this entire page:

The Federal Role in Education

Education is primarily a State and local responsibility in the United States. It is States and communities, as well as public and private organizations of all kinds, that establish schools and colleges, develop curricula, and determine requirements for enrollment and graduation. The structure of education finance in America reflects this predominant State and local role. Of an estimated $1.15 trillion being spent nationwide on education at all levels for school year 2012-2013, a substantial majority will come from State, local, and private sources. This is especially true at the elementary and secondary level, where about 92 percent of the funds will come from non-Federal sources.

That means the Federal contribution to elementary and secondary education is about 8 percent, which includes funds not only from the Department of Education (ED) but also from other Federal agencies, such as the Department of Health and Human Services’ Head Start program and the Department of Agriculture’s School Lunch program.

Although ED’s share of total education funding in the U.S. is relatively small, ED works hard to get a big bang for its taxpayer-provided bucks by targeting its funds where they can do the most good. This targeting reflects the historical development of the Federal role in education as a kind of “emergency response system,” a means of filling gaps in State and local support for education when critical national needs arise.

This page says what I assumed: the locus of control for schools is contained in state and local governments.

The Department of Education’s missions include: (this is my paraphrasing)

So when Betsy Devos had no answer or experience for #1, didn’t know proficiency versus growth for #2, doesn’t know that teachers buy their own pencils (among a hundred other things) for #3, and wants to privatize schools so those schools can legally discriminate on race, special needs, religion, etc. #4, well, we have a BIG CRISIS.

State and local governments spending on students range widely. The graph on this site is interactive and shows the largest percentage of the budget is on educator salaries, and then benefits. This site is fairly consistent the Washington Post’s article, “The states that spend the most (and the least) on education, in one map” 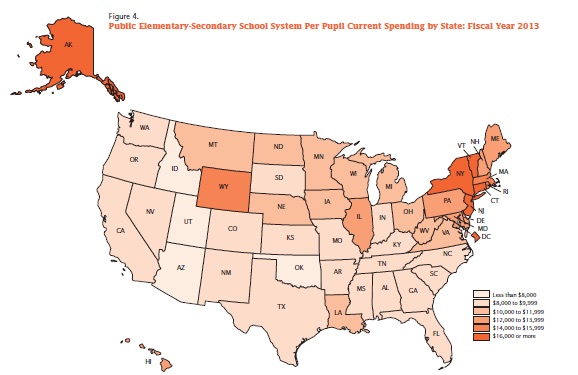 There’s an even larger range separating the lowest- and highest-spending of the nation’s largest 100 school districts: At the low end is Jordan, Utah, at $5,708 per student; at the high end is Boston, Mass., at $20,502.

Part of the variation is due to the huge differences in costs of living nationwide, which influence everything from teacher salaries to the cost of building and maintaining school facilities. Part is also due to economic realities — many states’ education spending remains lower than it was before the recession.

And part of the variation is due to political decisions to invest more or less in schools, or to do more or less to equalize education spending across low- and high-income areas.

Federal data show that there is a growing gap in education spending by the nation’s poorest and most affluent school districts.

And that is where it matters.

It’s about access and opportunity. It’s about upholding our values. It’s about free and accessible public education TO ALL. There is no one government agency that’s not important — not health,  not the environment, housing, and certainly education. If you climb up Maslow’s hierarchy the government agencies were doing a pretty damn good job, until the man with the orange pucker stepped into office.

But even with the Dept. of Ed, states still struggle, for a variety of reasons. From this site, Louisiana ranks the lowest, while Massachusetts the highest. When we talk about mission numbers 3 and 4 this is where it will hit home for every American family that isn’t part of the 1%: we want standards, just not bought and paid for standardized testing. We want free access for all children. We want inclusion. I want to teach refugees, immigrants, all religions, all neighborhoods. I want the children of our nation to get to know one another. To learn how to play and work together. I don’t want false science taught in schools. I want separation of church and state. I want a Muslim student to feel as welcome as a Jewish, Christian, Buddist, Hindu, Sikh, atheist or agnostic. I want children to say the pledge and mean it. I want children to be able to move from Idaho to Florida and know that they are receiving an equal, high-quality education that is consistent with rigorous standards and cognitive demands. I want learning outcomes to be transparent, objective, and based on research, not whims.

This is what we have to lose, and nothing to gain. If the house needs repair, you fix and mend, not burn it to the ground. And if children are once again segregated and isolated, no one will hear them call for help, because there will be no department who will be unified and dedicated to answer the call.

I want the states to be united on this issue especially.